The Springbok is not just another very interesting animal in South Africa – but is actually the country’s national animal. By way of description, this animal is a medium-sized antelope popular and majorly common in the southern part of the continent of Africa.

It stands out for its habitual ‘pronking’ display, which you should have likely seen before now (if you follow the animal world). That is, you can easily describe the Springbok as that small antelope-looking animal that repeatedly jumps vertically into the air while displaying its white rump underneath its structure.

Why Is The Springbok The National Animal Of South Africa?

As stated before, if discussing national pride, we can’t but put the country’s national animal and rugby in a similar line. Now, we usually see the springbok symbol as being attractive and nice as a national emblem – but things used to be different.

During the apartheid period in South Africa where the white minorities dominated the blacks in the country, the Springbok actually symbolized oppression, and its emblem is seen as standing for oppression – which wasn’t cool with the oppressed.

However, when South Africa conquered the dark period of apartheid, the indigenous government had it in mind to separate itself from the emblem – but when Nelson Mandela stepped in as president of the country, it changed everything.

Mandela, who was vehemently respected, intervened to make pleasant the situation for rugby lovers in the country who were mainly whites, and he retained the emblem. He adorned a replica of the Captain’s no 6 jerseys with the emblem before the famous South Africa vs New Zealand game in the final. And as South Africa eventually won the game, it turned a lot of things around, and it became obvious that the Springbok emblem will remain a national pride for the country. 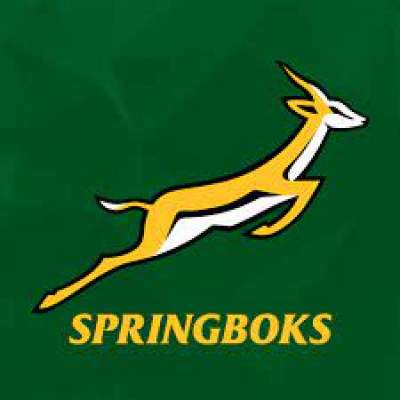 The scientific name of the Springbok is Antidorcas marsupialis, and it’s not only found in South Africa alone, but you will also see a handful in other southern African countries – including Angola, Botswana, and Namibia. This animal can’t be found just anywhere and everywhere. However, it appears the animal is of greater importance in South Africa than elsewhere.

The medium-sized antelope is usually found in grassland and savanna habitats, and its population is said to be increasing too (as highlighted before, it is not an endangered animal). This animal is a slender one that can run at speeds of up to 88 km/h (55 mph). It is appropriately described as an agile antelope with a shoulder height of around 80cm.

To distinguish the Springbok easily from other animals, there are certain features and characteristics you should watch out for. The animal has a pale brown neck, as well as its shoulders and back. It has a white face with a black stripe running from each of its eyes to the corner of its mouth. The average springbok has ridged, pincer-shaped horns.

It has a fold of skin that runs from the middle of its back to its rump. When opened by the Springbok (which it does when nervous or excited), what is displayed is a striking white patch of hair.

We can’t but talk about the popular pronking associated with this animal. You should have seen pictures of the Springbok doing this.  It is actually one of its usual features. It occasionally makes a series of vertical leaps with its back arched, pointing its head down while at it,  and ultimately exposing its white rump hair exposed.

There are over a million adult springboks out there – meaning, they are not really endangered, unlike some animals out there in the world. But our concern is to make readers realize here that the springbok is a national animal of South Africa. If you can’t relate yet, you will do so very soon, and you will be curious to see what others are.

What Do Springbok Symbolize?

The Springbok is a symbol of national pride in South Africa

If you should see the symbol of a springbok somewhere (even in a picture), you will likely see it displaying its pronking. Definitely, this meant a lot to the average springbok. It should be noted that they don’t only do this for the fun of it all the time, but it is also done to alert other springboks that there is a predator around. It can also be utilized to stop certain predators from harming the animal.

Why are South Africans Called Springboks?

South Africa, as you should know already, is a pretty unique country, and is one of the outstanding African countries we have around. The country is actually the ninth-largest on the continent (the twenty-fourth-largest in the world).

While the springbok is a national symbol and pride in South Africa, it should be noted that this found uttermost expression in South African rugby. Back then in 1896, the African country got their first test win over Britain. It was the first time they put on the green jerseys. Then, in 1906, the rugby team was referred to as the ‘Springboks’. This was actually due to the springbuck on the badge.

When did the springbok become South Africa’s national animal?

The year 1906 was when the springbok was first used as a symbol of South Africa. And as you will get to see, this development can’t be separated from rugby.

When the country’s rugby team toured Europe that year, it was claimed that former captain Paul Roos alongside some others brought up the nickname so as to prevent the English press from inventing one of their own.

In conclusion, we have established that the Springbok is one of South Africa’s national animals, and the emblem of the animal became a thing of national pride in the country (what used to be an emblem of oppression, becoming a symbol of national pride for South Africans). In reality, this animal is an exciting one, and it is nice to also know that it is not an endangered one.

It should be noted that the Springbok don’t only do this pronking for the fun of it all the time, it is also done to alert other springboks that there is a predator around. It can also be utilized to stop certain predators from harming the animal.

Located in the deep southern sphere of Africa, South Africa is filled with many animals, including elephants, leopards, hippos, lions, and cheetahs. It is of importance to conservationists on a global level and is also a country whose wildlife is a huge tourist attraction, with folks from different places in the world coming in droves to see these animals. This is good for the South African economy. They make money via the tourist industry too, putting in place a reasonable structure.