List and names of private prisons in South Africa. President Nelson Mandela wrote in his autobiography ‘no man can truly know a nation until he has been inside its prisons.’ Prisons are an unfortunate reflection of every society. Just one look at the inside life of prison will explain to a trained eye all that he needs to see about the state of affairs of a country. By looking at a prison you see all the social issues at play: Social Justice, Inequality, Economic Disparity, and other such crimes against humanity are the virus that brings about the sickness of Crime.

When there is a crime, it follows naturally that there will be prisons. Prisons are society’s natural reaction to crime. The dangerous criminals are simply rounded up and put together in a madhouse where they are made to live together with birds of the same feather.

The Mangaung Prison is a privately managed correctional facility located at R702 Dewetsdorp Rd, Rodenbeck, Bloemfontein, 9301, South Africa. The prison is managed by the British security company G4S as part of a consortium. The correctional facility is put under the management of GS4 by The South African Department of Correctional Services under a 25 years management contract. The Deal was signed in the year 2000. The Mangaung Prison can accommodate around 2,000 prisoners, although it is not been utilized to its full capacity.

Although the Mangaung Prison has not suffered the same plague of overcrowding that other prisons in the country have suffered, the prison has been in the news for violence.  In October 2013, a female custodian with 13 years of experience was violently taken hostage by some rioting prisoners. Thankfully, she was later saved by a special police task force without having suffered any harm. That same month the Department of Correctional Facilities temporarily took over the prison. It was given back to GS4 after some negotiations. 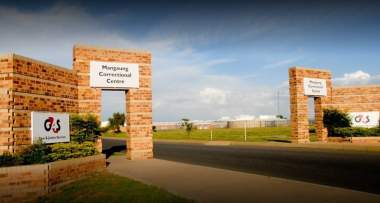 The Kutama Sinthumule Correctional Centre is a privately managed prison located at  Sparrow Road, Louis Trichardt, 0920, South Africa. The correctional facility is managed by the American security company GEOgroup. The management of the facility can be reached via phone number: Phone: +27 15 519 4500. The prison has a Capacity of 3,024.

In 2013 inmates at the Kutama Sinthumule prison in Limpopo went on the rampage. They burned down a section of the prison, claiming that prison guards left them locked up in cells to starve when they went on strike. Investigations about this and other actions of the workers on several other prisons resulted in the dismissal of about 330 members of the Police and Prisons Civil rights union.

A major problem of the South African prison system is violence. This can come in the form of violence from fellow inmates with whom individuals are imprisoned or ill-treatment from correctional workers in whose care inmates have been entrusted. All these are common during arrests and while in prison. Another factor is the Gang culture, which is very present in South African society, and which unmistakably finds its way to prison life, and therefore reflects behind bars. Sexual abuse is a common phenomenon and it is linked to overcrowding rates and understaffing. Sexual exploitation can come in several forms; first, fellow inmates can take advantage of persons who are smaller than them or less strong compared to themselves and make them perform sexual acts on pain of beating and other forms of physical punishment.

At the expiry of their prison sentence, they are then returned to society, either as better people or as damaged persons, further destroyed by their time with hardened criminals, in an unfriendly environment. In order to try to solve the problems faced by the prison system, many countries have begun an experiment in which inmates are put not in the charge of the state authorities but in the care of private companies licensed by the state.

Allegations of torture that have been made against GS4 and the allegations of starvation that have been made against GEOgroup make it glaringly clear that private prisons are not free of trouble in themselves. With that in mind, it is evident that society has to look further than just adopting a mentality of locking up persons to serve a prison sentence.

The emphasis must shift to correcting prisoners rather than incarcerating them. Without any reforms, prisoners would simply be put on hiatus, after which they are unleashed on society with a renewed vigor, energy, and tenacity to do all things that are bad. An unfriendly environment in which prisoners, particularly first-time offenders are exposed to daily violence mixed with gang culture, as well as sexual exploitation from inmates, as well as prison workers, can only equal more violence. that means that inmates, when released from prison can only come out of prison worse than when they went in. This can only be abated by a total reform of the prison system aimed at breaking the vicious cycle. correctional facilities should shift their attention from punishing inmates to educating them, enabling them with skills and upon releasing them attaching them to places where they can care for themselves without feeling that they have no choice but to go back to the crime that got them locked up in the first place. Secondly, compound prison complexes housing many different categories of prisoners should be discouraged because the maximum-security inmates leave an unmistakable print on the other prisoners, making them more hardened criminals.